I recently wrote a patch for initramfs that resolves this issue; after application of the patch all data written by a PVH DispVM (including to swap) is encrypted by an ephemeral key. The code and a guide is available at 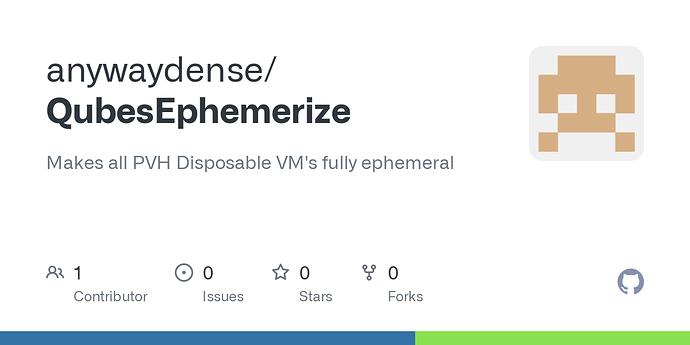 Hopefully this will find its way to R4.2. The patch has been tested only on the most recent stable R4.1.

WOW. I saw the title and definitely not expecting this. Up until now Qubes “disposable” has been like browser “private mode”. Adding ephemeral encryption takes this to the next level. This has to be one of the most consequential improvements in the security posture of QubesOS in a long time.

I am going to do a full backup and test this out over the weekend and report back.

@ewokky: if you just want to convince yourself that it works you don’t need a full backup. Instead create a copy of a kernel in /var/lib/qubes/vm-kernels, e.g

Now AppVM is made fully ephemeral. In addition all the DispVM’s that will be subsequently created based on this AppVM will also inherit the ephemeral property. To test this issue

and check that this DispVM is fully ephemeral (well it has to because xvda, xvdb are readonly, you can only write to xvdc and xvdc is being encrypted by ephemeral=True). If you don’t want the AppVM to be fully ephemeral simply make xvdb writeable again with qvm-volume config testapp:private rw 1.

The same mechanism works for DispVM’s: if you make a named DispVM use the kernel testkernel and you make its xvda, xvdb read-only and make xvdc ephemeral using qvm-prefs then this DispVM will be made fully ephemeral. This will not work on sys-usb and sys-net since they are HVM and not PVH. If you are concerned about sys-net and sys-usb I suggest running them fully in RAM. I have a solution in mind that I’m working on.

Note however that what I outlined above is a tricky way of using this patch, it’s easy to get things wrong. For example the changes made this way might not be persistent across reboots. Furthermore DispVM that were created before the AppVM was made ephemeral are not made ephemeral – one would have to clone them, delete them and then reclone them back. Patching dispvm.py removes all of this unnecessary confusion, every single PVH DispVM is then made fully ephemeral.

If you are really interested I have a python script that allows one to make only select AppVM’s fully ephemeral in a way that is persistent across reboots (it edits qubes.xml which is arguably even more dangerous than editing dispvm.py :)). If there is interest in that I can upload it too. I just find it a harder way of using the patch … less consistent, and more easy to get wrong, and also less in the spirit of what we actually want: all DispVM’s fully ephemeral. By the way even though all my DispVM’s are now fully encrypted I haven’t noticed an impact on performance.

Hopefully this will find its way to R4.2

Wow, great work. Looks very promising and hopefully will be the new default.

Have you ran into any issue after implementing the patch?

As a noob QubesOS user, can you explain a bit more this stuff about “getting written to xvda, xvdb, xvdc”? Also can you shortly explain what is a “PVH” ?

The Paravirtualization Spectrum, Part 2: From poles to a spectrum - Xen Project

it also makes sense to put logs to some securely disposable place as well?

@BEBF738VD : The only issue that I observed so far is about HVM’s (that are also DispVM’s). After implementing the patch newly created HVM’s might start but will refuse to run any applications from qvm-run. However this is easily fixable just by issuing

The point is that HVM’s cannot be at present fully ephemerized and this command disables the patch from running in initramfs. I mentioned this in the last note on the github page.

It would be good if somebody could check whether this command needs to be issued on sys-net and sys-usb after patching. They might be not affected because they might be still reading their configuration from qubes.xml. In the next iteration of the patch I’ll try to fix the issue with the HVM’s.

My understanding is that @marmarek is intending to utilize a very similar methodology for ephemeral disposable VMs (hence the scaffolding OPs approach uses) but there are some edge cases and UI management items he still has to mull over (as well as the time factor) before moving forward.

Just to have links here to related issues, for completeness:

**The problem you're addressing (if any)** Considerable information about the h…istory of disposable VM usage, as well as some contents of data from inside disposable VM leaks into the filesystem of dom0 and in most cases, survives reboots. In particular, the leakage into the xfwm4-*.state files (and lack of cleanup) is particular disturbing. e.g. in dom0 rm disp_files.txt # if exists rm disp_contents.txt # if exists sudo grep -rn '/' -e 'disp[0-9]' --exclude-dir={dev,proc,sys} | sort > disp_contents.txt sudo find / -name \*disp[0-9]\* | sort > disp_files.txt # matches references to disposable VM names in filenames Some findings on files related to disposable VMs (via disp_files.txt): 1. snapshots/volatile volumes for disposable VMs that were not shutdown correctly in the past (found in /dev/qubes_dom0/ and /dev/mapper/ ) 2. xml config files for the same in /etc/libvirt/libxl/ and /run/libvirt/libxl/ 3. appmenus for the same in /home/admin/.local/share/ 4. qrexec files for the same in /run/qubes/ 5. qubes.db pid and sock files for the same in /run/qubes/ 6. linux mapper links for the same in /run/udev/links/{\x2fmapper,\x2fqubes_dom0}/ 7. directories for the above in /var/lib/qubes/appvms/ 8. libxl logs for every(!!!) disposable VM ever run in this Qubes install in /var/log/libvirt/libxl/ 9. qubes logs for every(!!!) disposable VM ever run in this Qubes install in /var/log/qubes/ 10. xen console logs for every(!!!!) disposable VM ever run in this Qubes install in /var/log/xen/console/ Some finding related to files *containing* references to disposable VMs in dom0 (via disp_contents.txt): 1. Current and many historical disposable VM references are found in files in /run/udev/data/b253* files/nodes. 2. xfwm4*.state files in /home/admin/.cache/sessions/ contains *many references* to disposable VM *WINDOW TITLES* (application names, web site names, etc.) since the installation of the Qubes install (as well as current session). 3. .xsession-errors* in ~ reference many disposable VM names 4. /home/admin/.config/pulse/{guid}-stream-volumes.tdb a binary file appears to have 0..n matches on disp[0-9]. 5. /etc/lvm/backup/qubes_dom0 has current disp VM names plus some that weren't shutdown cleanly. 6. /etc/lvm/backup/qubes_dom0_* files have historical disp VM names. 7. /var/log/qubes/qubes.log* references historical disp VM names. 8. The systemd journal has a ton of historical disp VM references. 9. /var/lib/qubes/qubes.xml contains a lot of historical disp VM references. 10. /var/lib/backups/qubes/qubes*.xml contains a lot of historical disp VM references. 11. /var/lib/xen/userdata* contains a lot of historical disp VM references. 12. /var/lib/logrotate/logrotate.status contains a lot of historical disp VM references. **Describe the solution you'd like** 1. Triage of types of data leaking into dom0. 2. Based on types of data, develop a Qubes policy on eliminating, reducing, cleaning or ignoring the leaked data. 3. Based on type/policy, institute efforts to reduce the content stored into dom0 (at all vs. short term vs long term). **Where is the value to a user, and who might that user be?** All users who may want the historical content of the disposable VM usage not to be memorialized. Journalists, security researchers, etc. **Describe alternatives you've considered** None appear to cover 100% of use cases. Perhaps TAILS in an HVM might reduce it the most. **Additional context** **Relevant [documentation](https://www.qubes-os.org/doc/) you've consulted** **Related, [non-duplicate](https://www.qubes-os.org/doc/reporting-bugs/#new-issues-should-not-be-duplicates-of-existing-issues) issues** #3504 (similar, but does not provide a focus on specific leakage into dom0) #4408 (anti-forensics on swap files only) #1819 (anti-forensics request only covers the block devices for the VM) #1293 (similar to 1819) #3360 (specific to dom0 logging only) #2024 (emulating Tails' approach, dom0 leakage still possible)