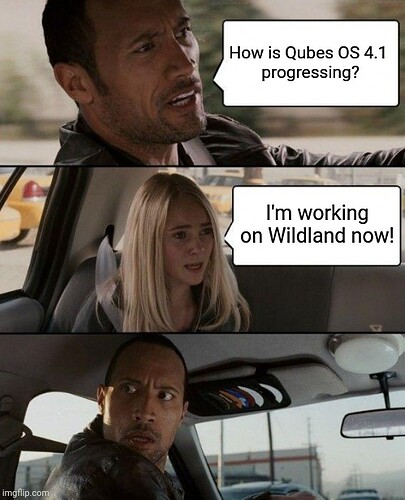 Sadly, figured this out today
Hope they continue to work on Qubes 4.1

Here are details to Wildland
https://blog.invisiblethings.org/2021/06/11/introducing-client-v0.1.html

It seems the blogpost under ITL’s blog caused some confusion.

As I understand it, the Qubes team is distinct from the one working on Wildland over at the Golem Foundation. Joanna’s blog just happen’s to be ITL’s blog (literally).

On behalf of the whole Qubes team, I’d like to thank Joanna for all of her years of work on the project. Under her leadership, Qubes OS has accomplished a lot, with only some of its many successes mentioned above. We look forward to continuing to benefit from her expertise as an advisor. At the same time, we wish her all the best in her new role on the Golem Project!

Also, Wildland looks conceptually quite nice – as does pretty much everything else on ITL’s blog. Looking forward to testing it. Congrats

I thought first the same, that’s a project which happened to be only Joanna’s.
But the website of Wildland is naming many of the QubeOS developers as team members.

Some of the ITL people working on Qubes also work on Wildland (e.g. me). There is no relationship between Qubes OS and Wildland.

I’ve spoken with Marek about this. We believe it’s important to clear up any misconceptions regarding members of the Qubes team working on Wildland.

We don’t want anyone to get the wrong impression or assume the worst. Some people might assume that we care more about other projects than about Qubes, that we’re bored of Qubes after working on it after so many years, or that we’re allowing ourselves to be distracted by something shiny and new rather than the boring but important “public service” work of maintaining Qubes.

None of this could be further from the truth. We still care deeply about Qubes. We’re still excited to work on it every day (well, most days

). We’re not bored of it. We’re not distracted by the shiny and new over the tried and true. It’s precisely because we understand that Qubes has become the secure bedrock of our digital lives that we’re highly motivated to maintain and improve it.

So, then, what’s the deal with Qubes and Wildland?

First, some background information: Invisible Things Lab (ITL) is a private company. Historically, ITL has donated countless developer hours to the Qubes OS Project since the very beginning. This is why many of the people on the Qubes team are paid by ITL. If this arrangement didn’t exist, Qubes wouldn’t exist. I can’t even begin to estimate the dollar value of the number of dev hours ITL has donated to Qubes over all these years. No other donor has come close.

Now, as a company, ITL has to pay its staff somehow. Obviously, Qubes is not a net income source. It’s a net expense. So where does the money used to pay these developers come from? Contracts. ITL has taken on many contracts for security work over the years. These pay the bills and keep the lights on, and they pay for most of the developers who work on Qubes. Wildland is one of those contracts!

These people are human beings with limited time who have to eat, sleep, and occasionally rest and spend time with their families, so obviously spending some time working on Wildland means some time not spent working on Qubes. But this can’t be helped. There is simply not enough funding to pay them to work on Qubes full time. While we’re immensely grateful for the donations we receive, the reality is that they don’t even come close to being able to keep the Qubes devs paid in the long run. Another source of income is required in order to keep Qubes alive, and that means contracts for ITL. (This point is not specific to Wildland. If it weren’t Wildland, it would have to be a different contract.) Finally, downsizing the team is not a realistic option, as it’s already difficult to keep everything running.

Admittedly, progress on Qubes 4.1 has been slower than we’d like, and this part of the explanation why. Nonetheless, progress is being made. For those interested in the details and in tracking this progress in real time, please see the Qubes R4.1-rc1 project in qubes-issues.

I think this post really tells apart the Qubes Team (and ITL more generally) from so many other companies. @adw thank you for addressing the community about this situation.

And really warm thank you for the whole Qubes Team and ITL for having made Qubes possible for so many years, even at an economic loss. Hopefully many more to come and if it is becoming ecnonomically-unbearable to sustain its development, I’m sure its partners and community will manage to find a way to help (thinking here of FPF, for example). Also, EU’s COVID relief plan includes some serious stimulus for cybersecurity investments grants for some countries, which could be potentially interesting.

@adw Thank you for clarifying
Now my concerns are cleared.
I’m greatful for your work and effort
Thank you all of the Qubes team and helper 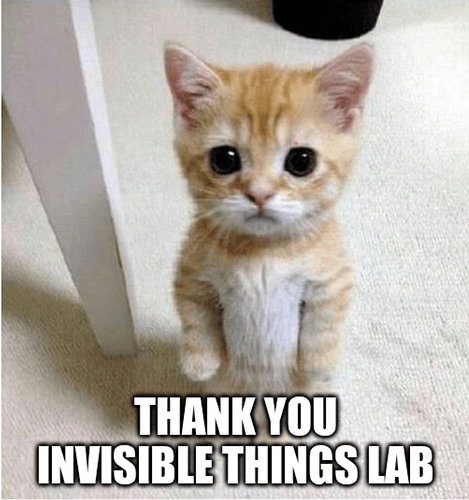