Since Monday I have been trying to get QubesOS 4.1 up and running on my PC (B550 mobo, latest BIOS with proper IOMMU groups, 5900X CPU). However, when I try to install 4.1 I get the following errors in the logs: 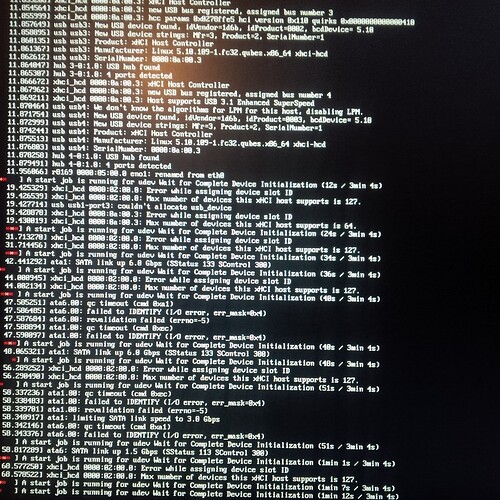 Those 2 device IDs are the 2 USB controllers in my system both pretending they are at maximum capacity (which shouldn’t be the case with just a usb mouse/keyboard and usb stick with the installer plugged in).

Because of this a bit later in the logs (right after we reach [ OK ] Reached target Basic System.) we see the following error which effectively kill the installation:

This is, I assume, happening because the usb stick with the installer on it has been disconnected due to the earlier problem.

What I have tried so far:

I was hoping someone might know more about how to solve this issue, or have a better idea than me about how to proceed. Otherwise things I might still try are:

Thanks in advance for the help

Looking at the github issues I expect that the following 2 issues are caused by the same bug:

[How to file a helpful issue](https://www.qubes-os.org/doc/issue-tracking/) #…## Qubes OS release Qubes release 4.1.0 (downloaded in last week from https://ftp.qubes-os.org/iso/Qubes-R4.1.0-x86_64.iso) Hash verified and was okay. ### Brief summary For several years I have been using Qubes OS on a laptop every day, so I wanted to install it on a new desktop computer. I downloaded the latest ISO image and then write it on a USB stick with the DD command sudo dd if=Qubes-RX-x86_64.iso of=/dev/sdY status=progress bs=1048576 && sync according to the recommendations from Qubes OS DOC (https://www.qubes-os.org/doc/installation-guide/). Then I put the pendrive into every possible USB port and started it from BIOS. Of course, I previously enabled virtualization for AMD in the BIOS under the name SVM (Secure Virtual Machine). **The problem was that no matter which USB port the flash drive was in and no matter if I turned it on in legacy or uefi mode, text was popping up every time with: "dracut-pre-udev:modprobe: ERROR: could not insert 'floppy'" like here https://forum.qubes-os.org/uploads/db3820/original/2X/e/e4000f9eaa27ab737160949fe6bdfeb4393889d3.jpeg** I am currently using Qubes OS on a laptop with: Disk SSD 512 GB. 8GB RAM Intel i5-3320M NVIDIA GEFORCE I wanted to install Qubes OS on a desktop computer with: Motherboard Gigabyte B450M NVIDIA ASUS GTX 1650 64GB RAM AMD Ryzen 9 5900X 2 x 2T HDD ### Expected behavior Correct launch of the Qubes OS installer.

Freezing the system in R4.1

[How to file a helpful issue](https://www.qubes-os.org/doc/issue-tracking/) #…## Qubes OS release R4.1 (downloaded last week) ### Brief summary First, I disconnected the SSD from my laptop and connected it to the PC via USB. There was the latest Qubes OS R4.1 on the disk but after connecting to a PC only I could run it, when I tried to start the VM eg "personal" the system froze. Due to the fact that I need the system to work and I do not have time to wait and I could not install Qubes OS R4.1 directly from ISO due to an bug in the installer I was forced to download the Qubes OS R4.0.4 version in order to update it to R4.1 After installing R4.0.4 on HDD on PC, the update went more or less without problems, only after restart I have the same situation as when connecting SSD via USB. The system boots, but attempting to start the VM results in a system freeze. Surprisingly, the watch works but the VM does not start and the keyboard and mouse do not work. This is a big problem when someone uses the system for everyday work like me and here two bugs one after the other. I have already reported the first one for the installer and this one is the second. I tested if this bug occurs on a different kernel and occurs on every kernel from the last R4.1 PC spec: Motherboard Gigabyte B450M NVIDIA ASUS GTX 1650 64GB RAM AMD Ryzen 9 5900X 2 x 2T HDD ### Expected behavior VM starts without problems.

Similar to issue 1, I also get that error in the logs and get to exactly the same point during the installation process. If he would run the installer in troubleshooting mode he would probably get the same output as is visible in my attached image.
Issue 2 suggests that 4.0.4 works just fine (as it does for me) but upgrading to 4.1 breaks the system. The issue suggests it is a freeze, but I expect the usb devices are just not working, most likely again the same underlying issue.

Were you ever able to resolve this? I’ve spent hours trying to figure this out; I’m glad I found your post. I’m about to try out the weekly build.

anything new on this topic?

I just tried to install quebes os on an actual AMD Ryzen9, and I am running in quite the same trouble. While IOMMU enabled in BIOS, all USb-devices are dead

is there any chance with some command line options for xen hypervisor?