Opinion on Qubes after one year of use

Hi,
Will qubes ever get out of the ‘testing’ phase?

I have been using qubes for a year and decided to do a system reinstall. Unfortunately qubes does not see templates at all (as you can see in the screenshot), and without templates qubes is useless. Why is this happening? 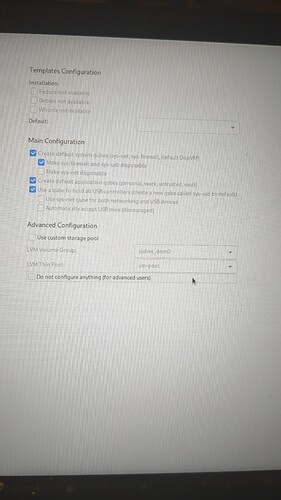 I downloaded qubes from the official site, created a USB installation media with rufus on two different memory sticks. Installing dd according to the documentation. The device is a Thinkpad laptop on which I have had qubes installed for the last year.

How is it that after so many years of project existence, qubes still has such trivial problems related to the installer itself?
When I’m at work, should I focus on the tasks set by my employer and rely on the OS as my primary work tool, or should I focus on troubleshooting qubes, then reporting problems to the qubes forum, and then collecting system logs?

I have used qubes and in my opinion, the user should not be constantly thinking about how to organise or fix something in qubes. By using qubes, the user constantly has to fight for the survival of the system…

I had qubes installed on three devices: two laptops and one desktop computer. Over the past few days, I have noticed a problem with the sound on each device - to put it simply: suddenly the sound on each qubes stops working, to the point where the whole computer had to be rebooted. I haven’t reported this problem anywhere, because it annoys me that such basic OS functions don’t work.
Tell me, what advantage does qubes have over windows? When will qubes reach its maturity?

Being able to use a 4k monitor, connecting an external sound card, using a second graphics card - these three example things can be done in Windows in a few ninutes. In Qubes, they can even be done in a few hours - seriously?

Most tutorials and documentation recommendations are ridiculous because they present long lists of commands that need to be copied from VM to Dom0 or rewritten.

When you ask yourself “how do I install sys-gui?”, the answer is a long list of commands that will ultimately do nothing.

When you ask yourself “how do I install sys-audio?”, the answer is a long list of commands whose execution will completely cripple the system.

I have tried to configure the sys-gui and sys-audio domain on several computers using the documentation and numerous tutorials on the forum - the same thing every time.

Windows HVM - When I connect a physical network card to the HVM and do a boot VM, I suddenly get the message “error: bootable device not found”. How is it that the VM suddenly stops seeing the bootable disk when I plug the network card into the machine configuration?

Example: I can’t fire up qubes on a laptop with an nvidia graphics card. Usually when there is such a problem, it is the developers of Windows or another distribution who fix the problem. They are the ones who eliminate the problem. And in Qubes? I beg to differ… The problem is still the same, you can dig through all the documentation including the forums (leaving aside the fact that you can find different and inconsistent solutions everywhere).

Another example: I wanted to test an automation software - ansible. To do this, I intended to have one fedora-based qubes, from which I wanted to manage several other debian-based qubes. When I started searching the forums for information on how to pass traffic between several different vm’s it made me catch my head…

I got the impression that Qubes is all about the developers and the chief users of the forum. For example: Why does qubes impose a default xfce environment? Why, in order to use a more user-friendly interface, does the user have to go through a bunch of weird tutorials on how to install kde, which is not supported by the main maintainers of qubes?

Initially I liked the concept of qubes and tried to use it as my main OS for work and home, but I admit - I gave up. I spent 60% of my working time trying to organise qubes work and fixing things that didn’t work through qubes.

I think I still like the concept of qubes, but the quality of implementation and ability to adapt quickly here is disappointing. What is your development plan for Qubes in the coming years? When will Qubes become reliable?

While I completely understand your frustrations, this is how I expressed my dilemma in banal: in order to survive in outer (digital) space, should I struggle to set/patch my astronaut suit (Qubes OS) or should I go there in my bikini (99% other OSs).

Putting it that way, it helped me to easily define my priorities.

I am sorry you feel frustrated. Most of the issues you described sound like user support issues:

Others sound like you are actually (attempting) to use functionalities that are explicitly marked as ADVANCED USERS ONLY (minimal templates, dom0 changes, inter-qubes networking) or TESTING (sys-audio, sys-gui).

Standard computing with Qubes OS on supported hardware is not much different from the experience you’d get with other Linux/Windows/OSX installs. Many of your use cases are difficult because they are attempting to use something that doesn’t exist on these other platforms – compartmentalization.

Finally I must ask: what do you expect?

You are comparing Multi-Billion-Dollar Juggernauts (Apple, Microsoft) with many thousands of employees to a FOSS project run by a handful of heros giving you abilities to secure your computing that are only rivaled by semi-secret military projects.

So your saying you have had three PCs running on a free operating system for a year and you came to complain about it? I am sorry the free thing was not easy enough for you… And where you see bad developers I see extremely successful charity doers.

I think you should focus on installing some self awareness my guy. Also most of the problems you speak of are your own fault. Get hardware that works, these people cant make Qubes work on every PC in the world, they can only do so much and seeing as they are working for free they get to chose what to work on and when. And FFS whose fault is it you chose to install a not so stable OS on your work PC?? This is some next level entitlement here…

Do you have any idea what goes into windows being so easy to use?? BILLIONS OF DOLLARS… These devs are not too far off and I bet their budget is a bit less than billions of dollars.

Hi @Pawelek85,
As you, I have been using Qubes OS for a year now. I have run Qubes OS in five different laptops: Dell G3 15 3590, Dell Latitude E 7440, Lenovo ThinkPad T430, Lenovo ThinkPad X230 and Librem 14 v1. In all these laptops Qubes Os has run very well. I have not had any of the problem you have mentioned. So I think, this is a personal problem and not a generalized one.

I’d like to thanks to the Qubes OS team for their great work. For me it is very admirable that this group of people spend many time of their life in develop an OS that protect and secure your digital life.

Well, I had quite a bit of difficulty installing Qubes. On the first machine, it couldn’t even see my SATA devices (including the SSD I wanted to install it to!) I was nonetheless able to run off a thumbdrive and satisfy myself that this is where I wanted to go–I just needed new hardware.

The new hardware didn’t work either, not without the absolute-bleeding-edge test version. (I have no idea if the released code has even caught up to it yet in its entirety.)

It’s hard to believe that was only 6 or 7 months ago. I now have a setup so customized I doubt many would recognize it. The only thing I took on that I couldn’t get working even with a lot of help, was a minimal-template sys-audio for this system. (I’m wondering how on earth they’re ever going to deploy a “standard” one.) And almost everything I have is a minimal template, including split veracrypt and the grand unified browser. But there is NO WAY I could have done any of that coming right out of the gate. In calendar terms, I am very new to this still.

My advice to you: Back off and do a basic install, and–if it works–add things to it piecemeal. And I do mean basic; the standard default qubes all off the one full template, no experimental stuff. You might even consider not using sys-usb initially if given the choice.

If it doesn’t work, maybe you need different hardware.

I got started with BASIC around 83, DOS in 88 and then Linux in 98. Still Qubes did take some real effort, but that effort is well worth it in so many ways!

My experience over these years is that anything very complex which also has real utility and quality is worth taking on as a teacher, i.e. to try taking cues from it rather than trying to patch and/or bang it into shape.

Which is why I got started on a Thinkpad X230, which made the initial phase far easier than it could have been.

The way I see it trying to get myself into “the Qubes way” rather than the other way around gives me a lot of hands on knowledge, structure and routines that I would not have gotten on my own even in a century!

Which again is why I’d be happy rebuilding templates or anything that I need to do to get it all operational again, trying to get it right the next time.

Of course this is just me, with too much stuff going on in different fields, others are capable of tweaking anything I guess