Hello guys.
How can i create two VMs with bridge connection (analog of the virtualbox bridge connection)??? I tried to create two sys-net vms but i didn’t manage to launch second vm. I.e. if i launch first sys-net vm then i get ip addr (via dhcp server in out local network) successfully. But i can’t launch the second one. I get the pci error because both vms use the same pci ethernet device (at the Device tab of the Qube settings menu)

I.e. guys. Using simple words. How Can I create two sys-net vms that will obtain different ip addresses from my dhcp server and these vms will use the same pci ethernet adapter???

None of this is impossible, depending on your level of experience.
It’s far simpler to shell out 10USD on a USB NIC, and create separate
sys-net qubes.

Hello unman!!!. Many thanks for your answer.
Can i setup my system like this 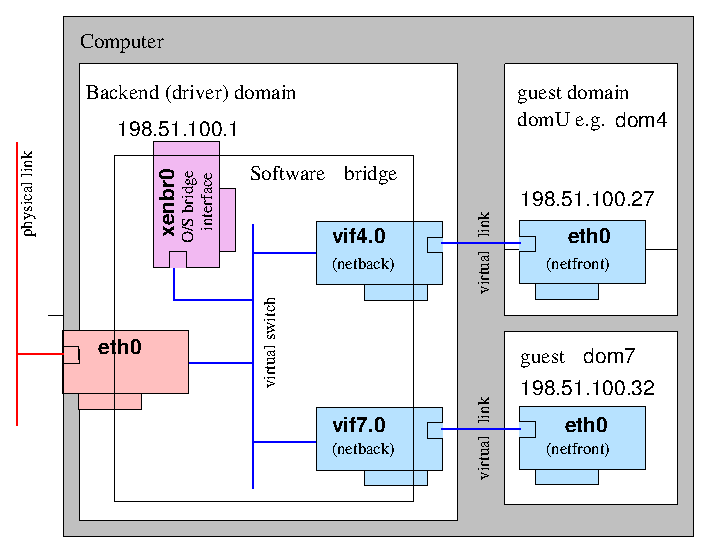 But ip addresses in dom4 and dom7 have to be obtained from dhcp.
Please help me.

I’m afraid I cant see that image at the moment.

Can i send you the image alternatively ???

I’m afraid I cant see that image at the moment.

@unman is an ascii kind of person. Does the following work for you? (had some fun doing this)

@deeplow
I really appreciate the effort. Stunning work, although ASCII art is
difficult for me too.

The problem is that as soon as people start using images in place of
words and explanations, they
a) make it extremely difficult to search and index posts,
b) stop providing explanations, and
c) exclude some other users.

If I understand that image, it looks like a standard Qubes setup, except
that Charley wants the qubes to get IP addresses via DHCP from a network
server. That’s rather different from the “simple words” explanation of
the problem, and isn’t, I think, currently possible.

I thought the problem was:

It seems to be:

qube0 and qube1 to get IP addresses via DHCP from network

I saw in the one of tabs of the Network Manager (sys-net vm) “Shared Device” option. May it needs for me???

Did you read me replies?
Which of those options are you trying to do?
If neither, please say EXACTLY what you are trying to do.

Don’t post a picture. Write it out.
The process of writing it out will help clarify it in your mind, and
help others to help you.

Take a step back.
Don’t say what you think the solution is (e.g “I need 2 qubes getting
addresses using DHCP from network”), but what the problem is (e.g “I
connect to a network that uses DHCP - I want to connect to the mysql
server from 1 qube, and to the intranet from another qube, and I don’t
want the admins to be able to see the connections coming from the same
IP address”.)
Be specific.

Thanks for you attention to my problem, @unman. Ok. I will explain what I did, but first of all i begin from what i need

Hmm, that doesn’t really address my question.
Why do you need to do this?
Is it absolutely impossible for you to get allocated static IP addresses
(or permanent DHCP leases) from your network admin?

@unman yes, it is impossible. Ip addresses have to be assigned dynamically.

Why do you think you need to do this?

Hello @unman. What do you think is this solution is good for me. [qubes-users] Custom LAN Network with dhcpd