Getting debian-minimal on par with debian netinst

I have been using minimal templates for some months now. I have set up all the sys-* qubes to use their debian-minimal equivalents, by consulting the guide in the docs. The resulting sys-* qubes are good, they work, and they use minimal amount of debain packages along with minimal amount of RAM.

Now, I find it difficult to employ same absolute barebones of minimal-templates for my daily work (along the lines of reading rss feeds, reading pdfs, journaling on the command line, managing the calcurse/taskwarrior, reading manpages, writing some scripts, etc.) extreme. I need a more “complete” debian setup than the debian-minimal one.

On the other hand, I also find the fully-fledged debian to be bloated. It is full of packages that my “study” focused qube won’t need, such as firefox, or multimedia players (these will have their own isolated qubes).

So, I have come to realise that I would be more content with having the debian setup which is analogous to its netinst install with only “standard system utilities” packages installed: 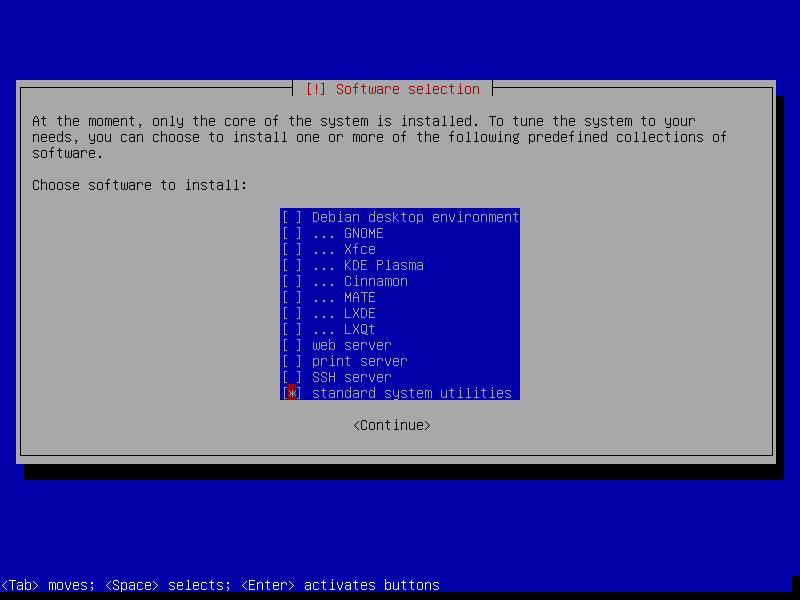 Such a lean-debian would be a better bedrock for other derivative qubes for specific job domains (such as web browsing, or watching videos/music on mpv, or reading pdfs and journaling, or writing scripts, or writing blog posts under anonymous identities).

So the discussion for this thread is, how to get the debian-minimal to such a “debian-lean” state with regards to the packages and programs installed. I would like to hear your opinions about which packages to install in order to get that. Meanwhile, I will be setting up a debian netinst install on a standalone qube and documenting the packages it is going to have installed with “standard system utilities.” I plan to replicate the resulting list of packs to be installed debian-minimal in order to convert it to “debian-lean.”

However, I have some question marks about this plan: for example, there might be packages that the standard system utilities provide that are unnecessary or even dysfunctional within the qubes os virtualization framework. If this indeed is, how would I discern such packages from the other useful ones.

Lastly, here is a usfeul stack exchange question that might be helpful for other people with similar goals: What packages are installed by default in Debian? Is there a term for that set? Why some of those packages are `automatically installed` and some not? - Unix & Linux Stack Exchange

Here are the packages unique to a minimal and to a stock debian
standard.
The standard utils brings in firmware, kernel and grub facilities.
The minimal template brings in X and Qubes tools.

unman, I am missing your attachments. Can you insert them on via the forum software?

If you remove the xserver it’s probably going to be a lot more difficult to use the qubes based on the template.

I’ve been notified that my attachments were blocked.
try these

These seem to be the same files. Where is the other one, for the “stock debian standard”?

I’m not having a good day.

OK. Thanks everyone. I think my presupposition that “netinst is more well-rounded than minimal” was wrong. I will look further into my workflow as to why I was thinking that way. And will keep building on debian-minimal, then.

To keep my names short, any template I base on debian-minimal is named deb11m; e.g., deb11m-sys-net. But deb11m is basically a clone of debian-minimal, so anything with that “stem” in the name is debian-minimal plus the bare minimum to make it functional for whatever it is it’s supposed to do.

But then, I take off my Linux geek hat and put on my “I want to use an app” hat. I will want more things (like a text editor that isn’t vi, GUI based file managers, and the like)…so I created deb11a…which is debian-minimal plus some user conveniences (a is for “app”). [Incidentally I’ve noted that vi on dom0 tolerates arrow keys a lot better than vi on deb11m based qubes.] Basically deb11a is everything I’d want to have in common between a, say LibreOffice qube and a GIMP qube; which is still a LOT more than I’d want in sys-net!

So basically I have two “basic” templates, one for “low level” stuff, and one that has a few things a user (as opposed to an administrator) might want, before installing, say, LibreOffice or Gimp, or media players on it. Each is minimal in that I don’t install extraneous software on it, but they are different, because they’ll have different roles.

I guess what I’m driving at is that I don’t see one “minimal” template satisfying everyone; heck I can’t get along with one just by myself.

I know there’s also a “core” out there that’s supposed to be more stripped down than deb11m–I mean debian-minimal–but I haven’t played with it much; it may be a suitable substitute for deb11m.

I am fine with the debian minimal approach (so far). Currently, I am building a minimal script which should be very modular, easy to extend and provides some help within the install routine.

The downside, the lines of code are growing and this makes the quick code audit more difficult. Please give me a few more weeks. I would really appreciate some feedback.

Back to the topic, if you go for one (main) application per AppVM, minimal template is a perfect approach imo. It is getting more difficult if you have new / not so common application. For this I have started a Wiki to better share the right set of packages. Unfortunately, the deb-mini community was not active here.

so I created deb11a…which is debian-minimal plus some user conveniences (a is for “app”). [Incidentally I’ve noted that vi on dom0 tolerates arrow keys a lot better than vi on deb11m based qubes.] Basically deb11a is everything I’d want to have in common between a, say LibreOffice qube and a GIMP qube; which is still a LOT more than I’d want in sys-net!

Which packs do you install on top of deb11m stem, in order to get the deb11a?

that’s 15, the last thing I do is force a full upgrade of everything.