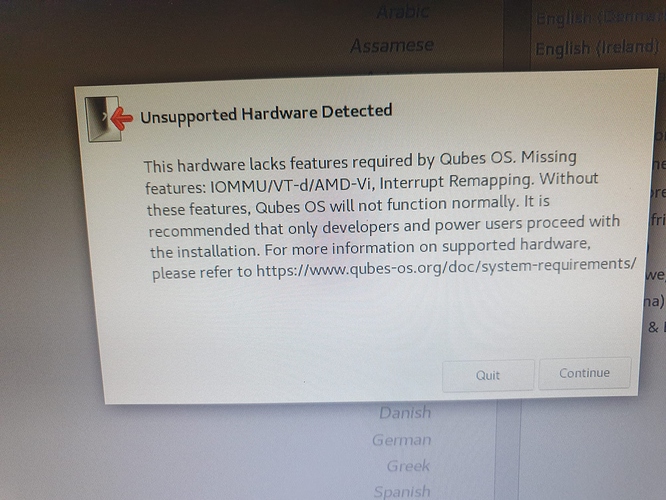 I got this error when i try to install qubes. I have got an Intel® Core™ i3-4370 Processor, and I found this on the intel website about my processor.

Does this means that i’m not able to use Qubes with my processor, are there is something else that eludes me?
Thanks

Does this means that i’m not able to use Qubes with my processor, are there is something else that eludes me?
Thanks
Yes, sadly it does. Qubes 4.0 and above do not support machines without
IOMMU (VT-d above). It can be done, but it’s not recommended and far
less secure.

is it safe /recommended to use a lower version of Qubes in my case?

is it safe /recommended to use a lower version of Qubes in my case?

That time is long past. 3.2 is well out of date and completely unsupported.

The reason the change was made is that the Qubes developers did not
consider the isolation provided without using IOMMU to be safe at all.

Frequently Asked Questions General & Security What is Qubes OS? Qubes OS is a security-oriented operating system (OS). The OS is the software that runs all the other programs on a computer. Some examples of popular OSes are Microsoft Windows, Mac...

Can I install Qubes OS on a system without VT-d?

Yes, for releases 3.2.1 and below.
You can even run a NetVM, but you will not benefit from DMA protection for driver domains. On a system without VT-d, everything should work in the same way, except there will be no real security benefit to having a separate NetVM, as an attacker could always use a simple DMA attack to go from the NetVM to Dom0. Nonetheless, all of Qubes’ other security mechanisms, such as qube separation, work without VT-d. Therefore, a system running Qubes will still be significantly more secure than one running Windows, Mac, or Linux, even if it lacks VT-d.

What is a DMA attack?

DMA is mechanism for PCI devices to access system memory (read/write). Without VT-d, any PCI device can access all the memory, regardless to which VM it is assigned (or if it is left in dom0). Most PCI devices allow the driver to request an arbitrary DMA operation (like “put received network packets at this address in memory”, or “get this memory area and send it to the network”). So, without VT-d, it gives unlimited access to the whole system. Now, it is only a matter of knowing where to read/write to take over the system, instead of just crashing. But since you can read the whole memory, it isn’t that hard.

Now, how does this apply to Qubes OS? The above attack requires access to a PCI device, which means that it can be performed only from NetVM / UsbVM, so someone must first break into one of those VMs. But this isn’t that hard, because there is a lot of complex code handling network traffic. Recent bugs include DHCP client, DNS client, etc. Most attacks on NetVM / UsbVM (but not all!) require being somewhat close to the target system - for example connected to the same WiFi network, or in the case of a UsbVM, having physical access to a USB port.