Every few months since starting Qubes more than a year ago, suddenly and without any apparent trigger, the Qubes interface becomes unusable. There is no clear reason why this happens. As you see in the pictures below, the colored-borders / edges disappear for all windows. I can no longer navigate between windows. The keyboard works in the last one opened works. Once I close the top window, the one behind it captures the keyboard strokes. Some keyboard shortcuts stop working (cant use Alt+F4 for example. Only Ctrl+Q to exit). And the problem persists upon reboot. My only solution is complete reinstall. Is there a fix for this that I am not aware of? Has anyone else experienced this problem? Is this by any chance an security / isolation-breaking incident? 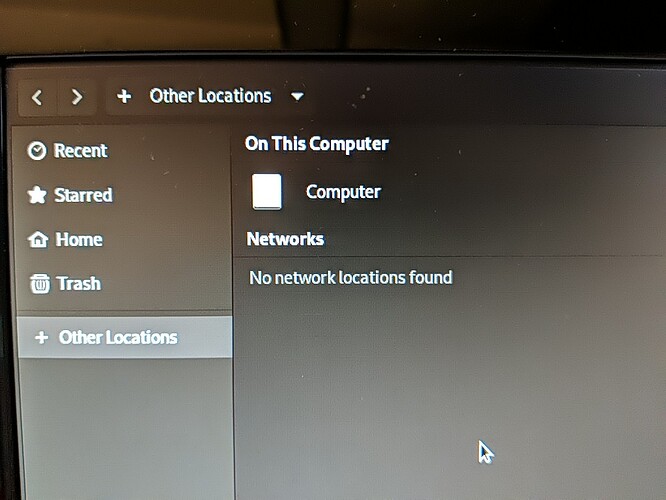 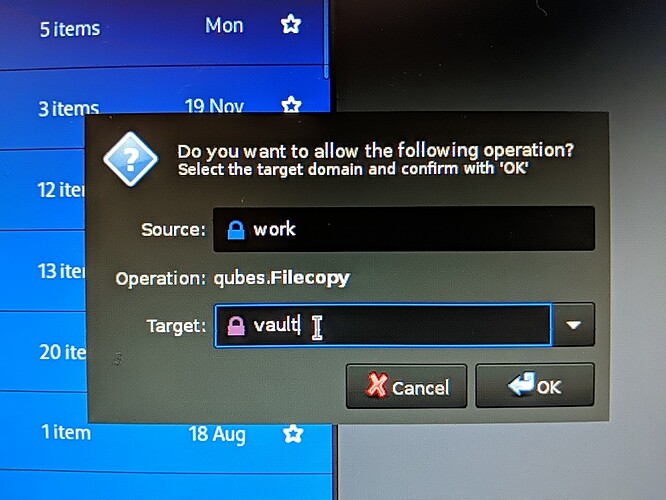 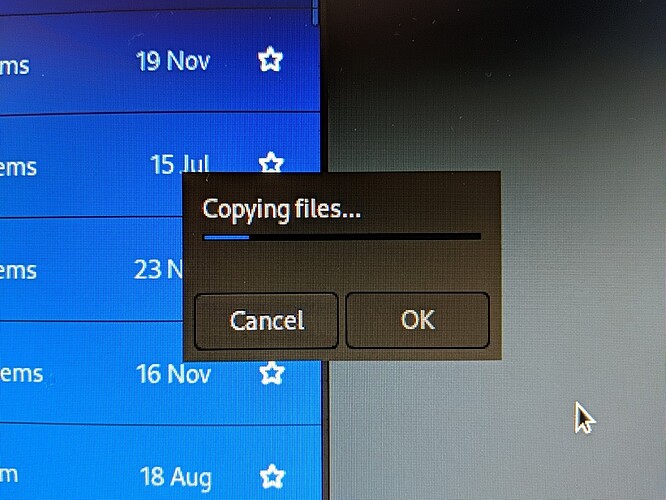 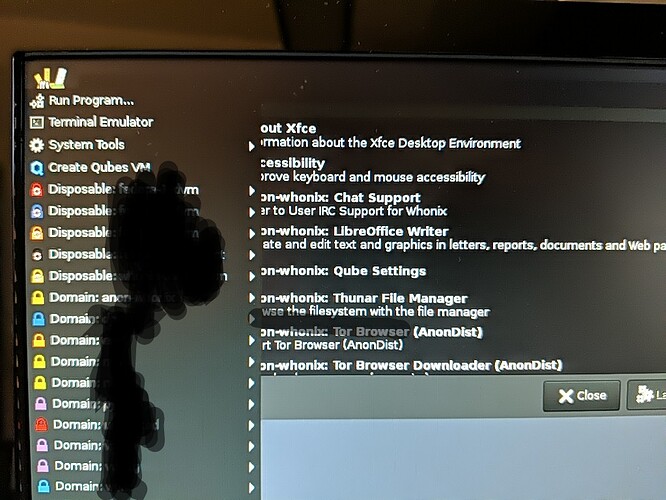 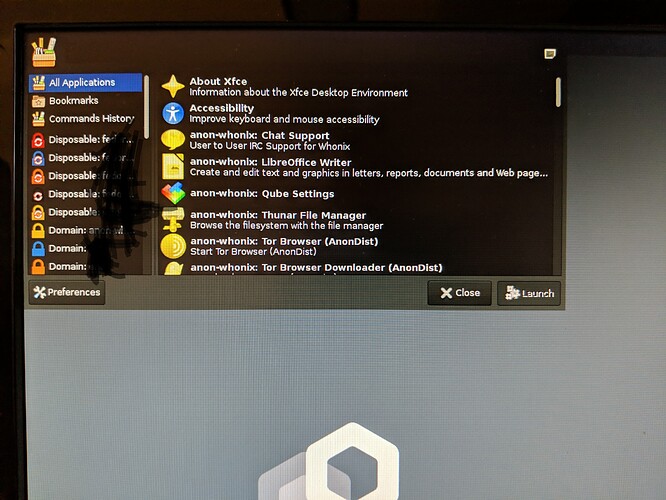 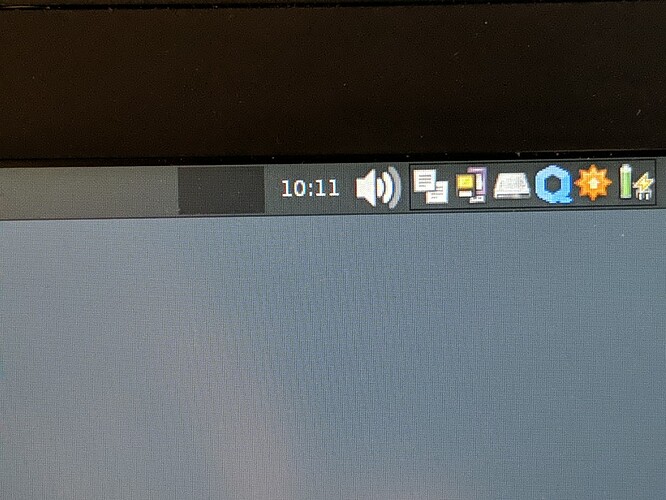 Long time user - never seen this behaviour, on any machine.

Me neither. This seems to be a problem with XFCE. It also seems not be drawing the task bar.

But this is a bug that really needs to be tracked down to the core. If I were an attaker, if I knew how to cause this, it would be the first thing I would do on the victim’s Qube.

We need stability for a system to be safe

I mean, ideally a secure system needs to be perfectly stable (which qubes isn’t yet). If it were always stable and nothing broke, anything out of the ordinary like this would be immediately classified as an attack. Things like this make attacks really hard to identify because we expect the system to break at any time…

If no one else has experienced this bug we should at least narrow down on a list of diagnosis @oijawyuh can do if it ever happens again. Might be the only way to track it down.

@oijawyuh - I have never experienced this behaviour in all my time using QubeOS. I echo the thoughts of @deeplow on this. Anything that is affecting the screen could be a big red flag, but at the same time there could be a non-nefarious explanation for the situation. This needs analysis.

If I were an attaker, if I knew how to cause this, it would be the first thing I would do on the victim’s Qube.

I disagree. Such a blatant change that immediately alerts the user would be a very poor attack. I struggle to imagine how it would accomplish much for the attacker.

If I were an attaker, if I knew how to cause this, it would be the first thing I would do on the victim’s Qube.

I disagree. Such a blatant change that immediately alerts the user would be a very poor attack. I struggle to imagine how it would accomplish much for the attacker.

Yes, it is blatant but sometimes someone cannot afford to reinstall the system immediately and may still use it for some days. During that time period, it’s “open season” for any interface manipulation attacks because the “trusted path” that Qubes typically ensures can be violated without noticeable differences.

Of course, the above assuming there is a way to trigger such bug event from an AppVM.

@oijawyuh not saying here this is the case. Just brainstorming about potential security implications of this bug.

Thank you @deeplow @adw @Plexus and @unman for your responses. If I am the only one known to have faced such a recurrent problem (while using a standard recent Lenovo Thinkpad), I admit that this is worrying. Also, I didn’t move to Qubes OS without a reason. Should an attacker be exploiting a zero-day in Qubes, I think he would have been able to steal from the vault gpg key, keepass database, as well as log-in credentials in the internet-connected VMs, while at the same time rendering my OS unusable. This means that the attacker would have achieve his purposes, and that Qubes’ security did not foil an attack but was solid enough to expose that something went wrong.

On a related issue, just to explain how difficult my journey with Qubes has been (and still is), in 2019, I faced a different albeit equally recurrent (every few weeks) major malfunction in Qubes that seemingly very few if anyone had. Back then, Qubes recurrently, without reason, boot into this screen: 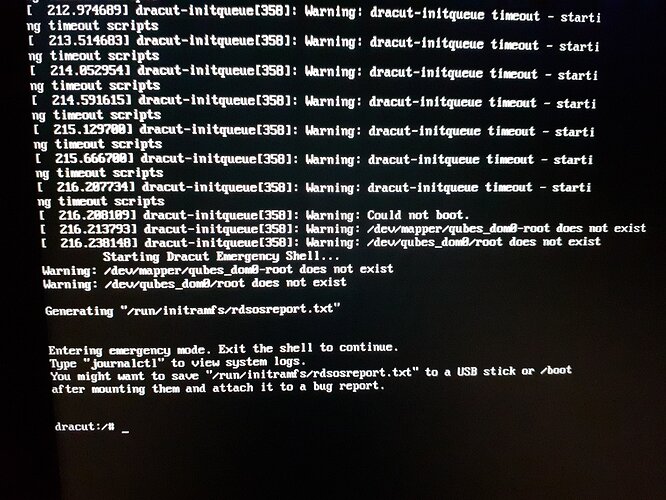 I searched online using the words in front of me, and found “somewhere” instructions that did get Qubes operational again. HOWEVER, when Qubes booted again, I saw this new Dom0 piece of information in the Qubes Devices:

So I had to re-install Qubes as I could not consider this to be safe.

I’m reinstalling Qubes every few months because it’s failing. It’s failing not because something is wrong with Qubes, because I’m the only one having these problems. But because…?

And should such a problem happen again, is there a way for the Qubes team to examine my laptop and understand what happened, just in case they need to fix something in Qubes?

I have a fresh XFCE4 install for R4.1 from October iso. updated to latest packages and customized xfce to a dark theme.

after a reboot, the background image warps in like diagonal blocks before quickly correcting itself, but then the xfce4 panel did not obey the theme coloring anymore (nor did the appmenu launcher, or qubes manager) when it had done so previously. the panel remains the initial default color when using system theme, but obeys solid color/image options.

now it does not fix itself no matter what, on each reboot the diagonal rectangle blocks appear briefly and then the bugged panel. the system tray section is okay, and obeys system theme, even the dropdown for qube.

I plan on ditching xfce eventually anyways, but this issue deemed reportable.

Have all of these strange problems across reinstallations been happening on the same hardware? If so, it could be a hardware fault. If possible, try a different computer. If the strange problems follow you to a new computer, are you making any unusual changes to the default configuration, e.g., installing programs in dom0?

Hi @adw. The 2019 problem was on a first hardware - a Lenovo Yoga laptop. The 2020 problem were on two different lenovo thinkpad hardware, x250 and now T480. I am not making unusual changes to the default configuration as I am a not an IT person.

Hm, it’s very strange that no one else seems to be having these problems, and they’re happening on completely different laptops. Can you think of anything unique to you or your situation that could possibly explain it?

I am not making unusual changes to the default configuration as I am
a not an IT person.

Can you think of anything unique to you or your situation that could possibly explain it?

I working on human rights. But that’s not that unique.

Are you copying anything into dom0 (different themes, icons,
backgrounds, fonts)?

No. I never did that as per the guidelines. The ONLY change in Dom0 is installing the blue light filter from the repository. When I sometimes wanted to change the desktop background to put my family photo, I took a screenshot of a photo using the Dom0 screenshot tool.

Do you have the compositor on or off?

What is a compositor?

Is it possible you are running out of disk space?

Never experienced this myself, but sounds similar to

Maybe try the suggestions in that thread?

What is a compositor?

I would recommend to uncheck “Enable display compositing”. Not sure it’s
going to help your issue, but it can’t harm.

Not an expert, but I think the compositor is trying to use hardware
support to render shadows and other effects that some might find nice
but add nothing in terms of usability.

I’ve reinstalled 4.1 multiple times lately. I have found possibly setting windows decorations to something else may be the cause of my previously mentioned breakage. As setting them on a fresh install could likely lead to break on immediately next reboot.

I have changed themes, fonts and more now with no reboot/panel glitch thus far while keeping decorations as default.

I only experience graphical glitches when resuming from suspend (in 4.1).
At first it is hardly noticeable but after a while I notice problems with window decorations and menus. When watching a video there are black rectangles appearing covering parts of the screen so maybe this has something to do with the graphics card (AMD here).

I never experienced anything like this on a freshly booted system.

Thank you everyone for your replies and suggestions. I will have to wait for the glitch to happen again to test your suggested solutions.

I do note that my problem is different from the one described here: Missing Title Bars & Keyboard Not Working. However, could the difference be because of the Qubes implementation?