Hello everyone. I have a lenovo thinkpad t430 and I want to flash it with heads firmware, but I can’t find guide how to compile heads with no binary blobs to make it fully open source and how to flash my laptop with it

Hello and welcome to the community. You should probably try on their forums, since in your post there is nothing Qubes OS specific.

Unfortunately, nobody contributed back a t430 disassembly/flashing guide and only a stakeholder page exists : Lenovo T430 - Heads - Wiki

You will find related information searching for t430 in issues.

Here are the board owners (who agreed to be tagged directly) that you can tag in issues (@their_alias):

For building, it would be the same as for x230, but changing “x230” to “t430” in board name. Depending if you have a HOTP compliant GPG USB dongle or not, choosing to build maximized or hotp-maximized flavor of the ROM.

Documentation for the Heads firmware project

Heads is officially a community driven project. The community is centered around its Github projects (heads and heads-wiki, the later rendered under https://osresearch.net) to centralize issues and knowledge and to reduce scattered information across unlimited social platforms that are unrelated to Heads effort.

Issues/pull requests on documentation should happen under GitHub - osresearch/heads-wiki: Documentation for the Heads firmware project

Issues/pull requests related to codebase should happen under GitHub - osresearch/heads: A minimal Linux that runs as a coreboot or LinuxBoot ROM payload to provide a secure, flexible boot environment for laptops and servers.

Hello @Brigant-le-grant
I’ve flashed the t430 with heads. Unfortunately you have to pull the whole thing apart to get at the u49 and u99 which needs flashing, unlike the x230.
Here is @Sven writeup, and here is mine.

I see a lot of manual commands in the guide, which download and clean script does automatically, including downloading, hash validation, ME neutering using unlocked IFD related regions and hashing of expected outcome while placing binaries where expected.

I also read a lot of confusion in this thread about 1vyrain.
1vyrain deactivates ME when 1vyrain is used. When flashing something else, that deactivation disappears. 1vyrain should be used to use 1vyrain, or flash skulls, but should not be used to flash Heads if the goal is to have neutered ME and have freed space guaranteed (modules are gone) nor to use extended Heads features in the long run. External flashing of Maximized Heads builds should be done externally, once.

I understand the desire of users to not have to open a t430 and disassemble it completely to access SPI chips, but unfortunately, flashing Heads through 1vyrain is not equivalent to flashing Heads maximized roms directly and externally. The reasoning for that is explained at multiple places under Heads documentation.

In a quick summary, flashing through 1vyrain will only flash legacy versions of Heads. That is, flashing t430-flash which will fit 4mb region, which can then be used to boot and flash the t430/t430-hotp counterpart (8mb image), which will neither deactivate nor neuter ME. Legacy builds were created to not modify neither IFD (which is considered locked) nor consider ME to be deactivated nor neutered: they are considered left untouched. Legacy builds are made to be flashed into IFD defined BIOS region, which is limited by the size occupied by non-neutered ME, and won’t permit those regions to be internally modified, unless the IFD and ME themselves are unlocked per an external initial flash of the 8mb SPI chip (requiring external dump, ifdtool usage to unlock IFD and flash back. So why using legacy at that point). This requires initial external flashing and cannot be done internally. This is done through flashing Maximized boards builds produced top (4mb) and bottom (8mb) rom images.

Basically and I repeat: while legacy and maximized boards configuration might seem the same, they aren’t.

Once on a maximized build, internal flashing reflashes the whole 12mb combined opaque SPI chip (flashrom -p internal) which serves a lot of purposes, including

Again, this is why contributions to heads-wiki would be beneficial from board owners. This should happen under 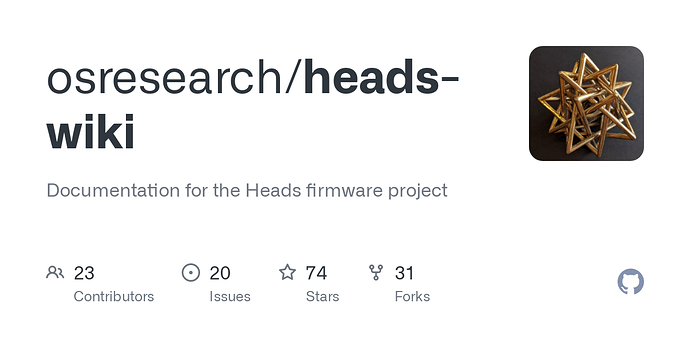 Documentation for the Heads firmware project. Contribute to osresearch/heads-wiki development by creating an account on GitHub.

Where instructions to do massive changes is documented under: Community - Heads - Wiki

Otherwise, efforts are duplicated and information is scattered and incomplete, as seen here with user recommendations and missed, important information.