Awesome work! Do you have a more self-explanatory title suggestion for this project?

Maybe something relating to the use-case where one would need this? Or just a combination these:

I had no idea feel free to change and is there a way I can edit #1 ?
I’ve did a rewrite about this with better format, add video and change the content.

I had no idea feel free to change and is there a way I can edit #1 ?

Weird, I thought you’d be able to edit your own posts. I’ve changed the title now. Maybe it’s too big. But I had no other way to include that all.

I can edit the title but not with the post, I’ll contact you if i need help to edit #1.

Some ago, i decide to post a build qubes with i3 and it lead me to learning more about how you build with other environment?

Instead of removing xfce from iso, what i did this time is add more desktop environment which we can choose at installation. 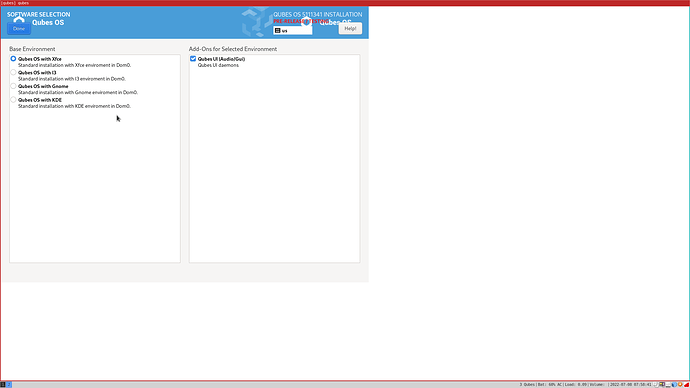 I have do a quick try and this is the result. 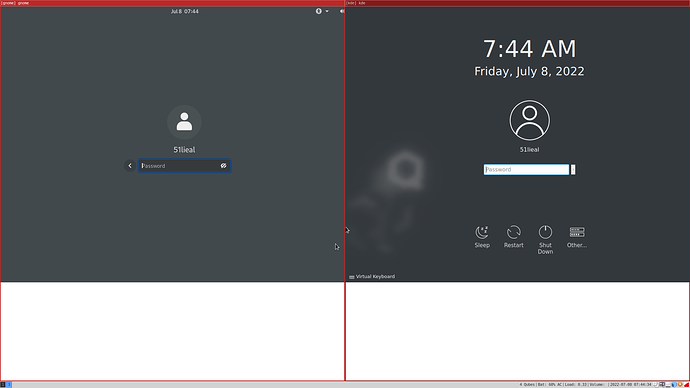 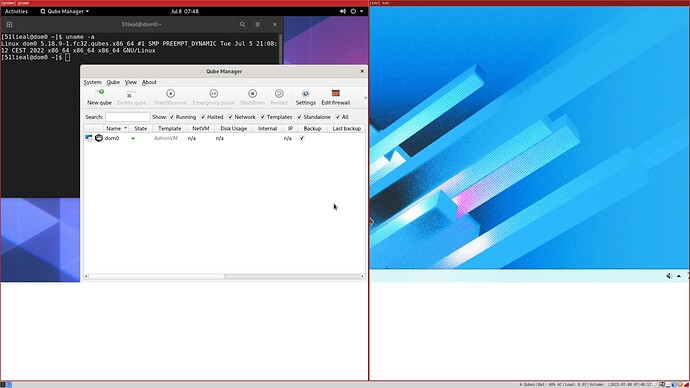 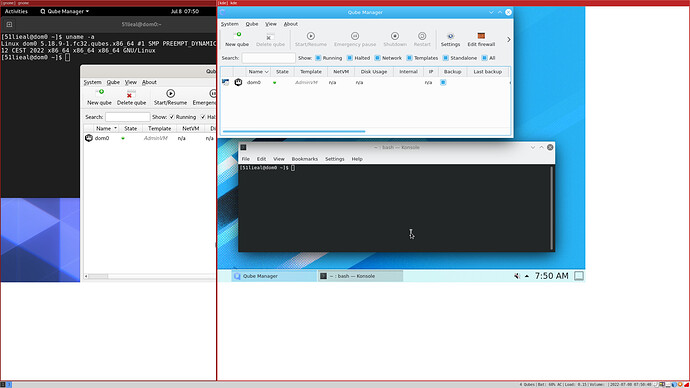 Just a first look and from my preference, I would choose gnome rather than kde, not only it more stable everything is just good.

Qubes with i3 is what I use as the host, you may want to see this thread.

another pict about gnome build : 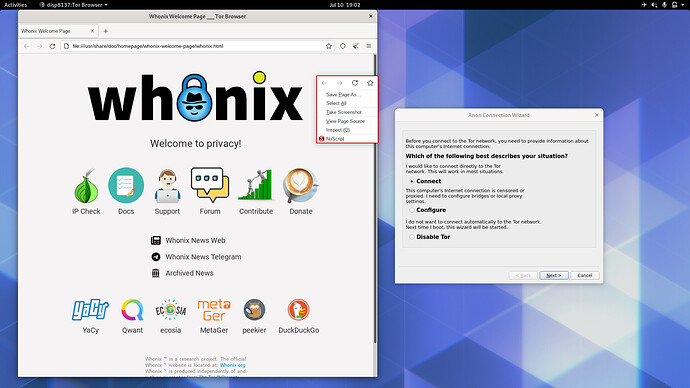 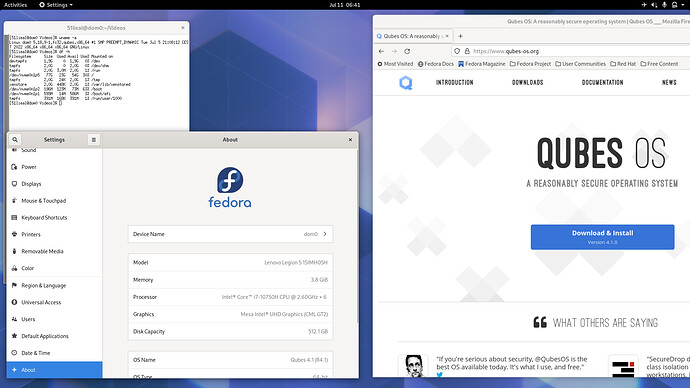 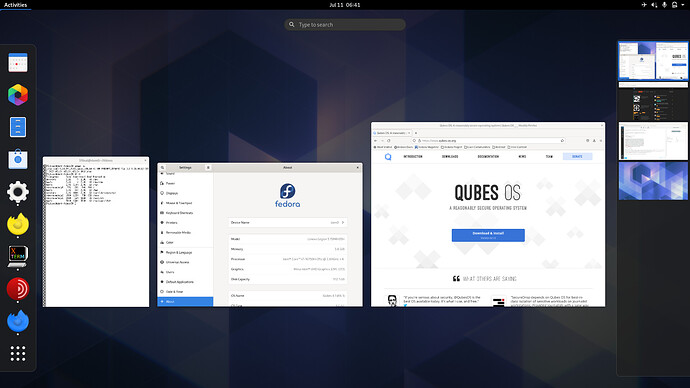 Thank you.
It worked, but when I uninstalled xfce I automatically installed openbox and lightdm, is there any way to remove this?
I would appreciate it if you could post your comps and qubes-kickstart where the packages for i3 and gnome are prescribed

It worked, but when I uninstalled xfce I automatically installed openbox and lightdm, is there any way to remove this?

You may want to build your own iso, rather than use official then remove package, you may break things.

you may want to add :

in the i3 group, and use awesome if you don’t like openbox

The kickstart is a full build, contains 4 DE and 3 default templates.
Gnome is currently in development, I have some list to add and to remove some package, but it stable enough for daily use.

This is for anyone who want to try building A full build of qubes os, this will include xfce, kde, i3 and gnome desktop environment which you can choose at installation. The gnome DE is actually a minimal gnome functionality, and there’s known bug (cosmetics). The packages is downloaded from fedora, I’ve only add dash to dock package.

We use pre-built qubes packages, how long the build is depends on your internet connection, we would change qubes kickstart and qubes dom0 comp with my own.

After finish, you could find your iso in ~/qubes-builder/iso

Here’s the video of this guide: 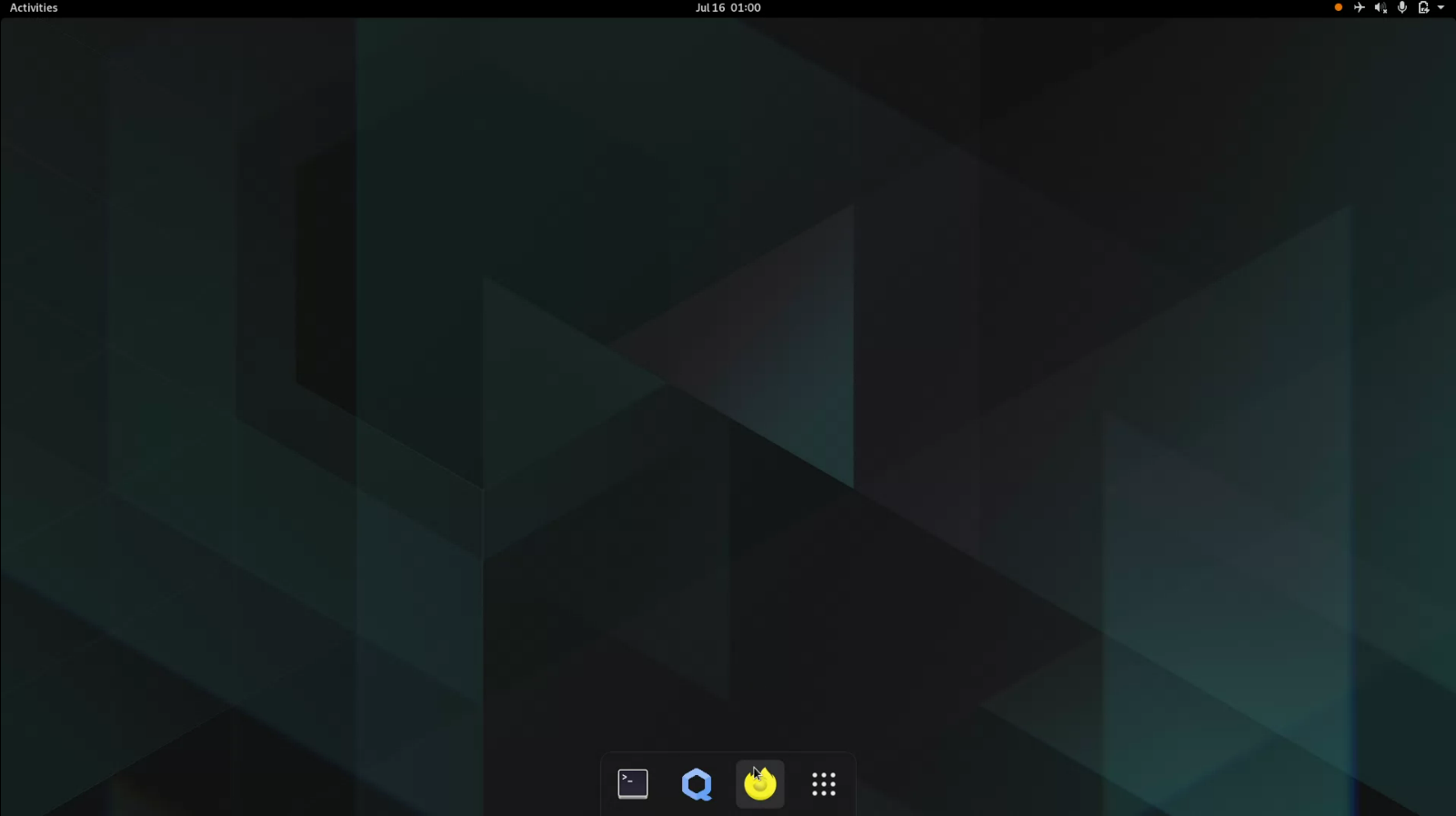 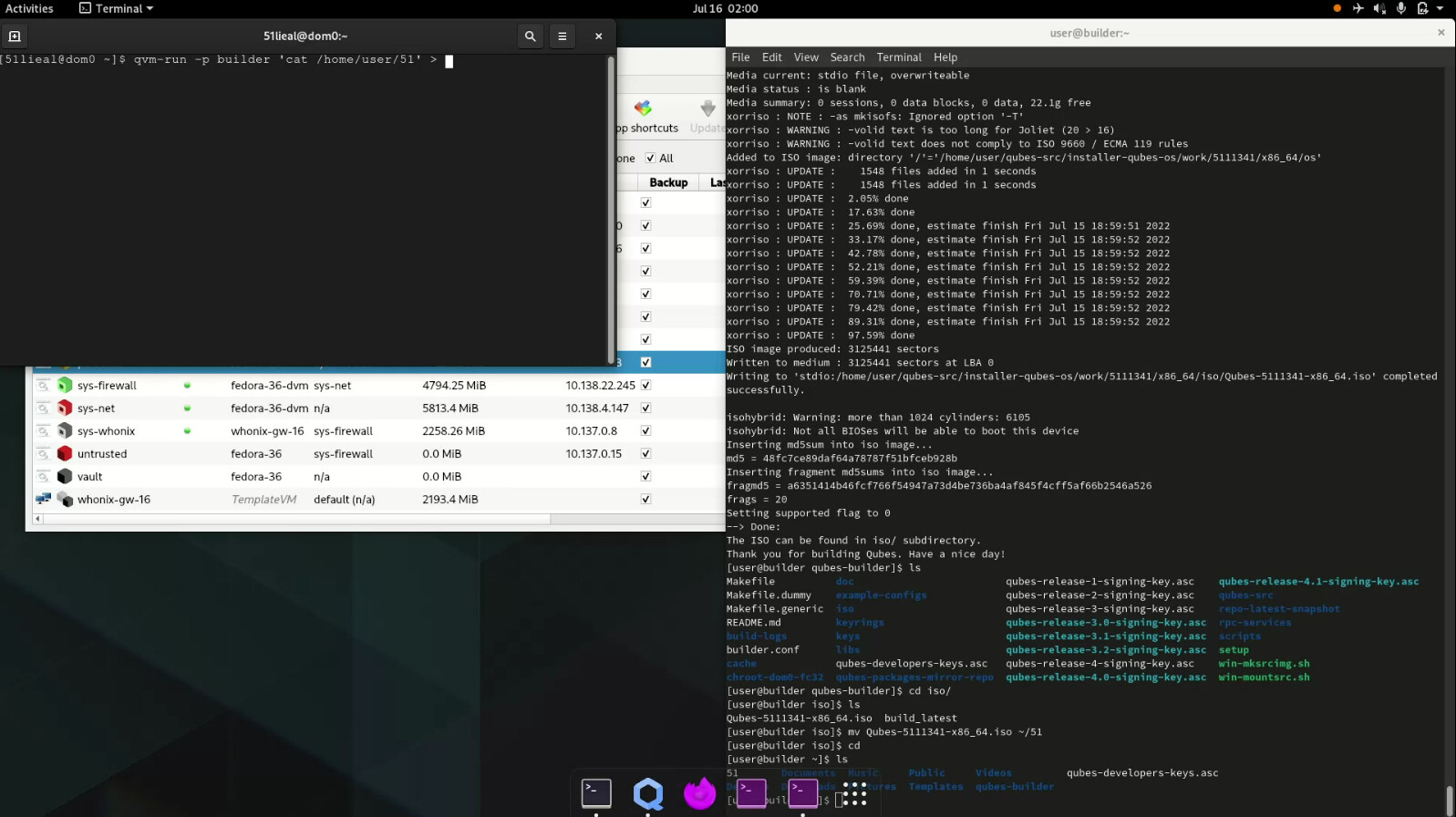 Btw, you couldn’t use gnome built-in screencast since I’ve only provided the minimal gnome functionality, but it’s already good enough if you want to customize it. It need take some time for me to research about what package need to remove in dom0.

I just skimmed thru this and will give it a thorough read, but I would like to ask, is there a step in which the user specifies that he only wants the i3wm and not the XFCE-tools getting built-in?

It’s entirely different, when you install i3, there’s no xfce or other DE installed.

Is there a step in which the user expresses his wish to have only i3wm (or other desktop environments)?

Hey I finally watched both webm files. It is nice to see that i3 installation only has i3 and no traces of XFCE desktop manager applications and widgets. Looks light and lean.

One thing that bothers me is that during installation the screen reads “PRE-RELEASE/TESTING.” What are the “security drawbacks” for compiling ones own qube ISO? Was that warning message there because you weren’t building with the “stable kernel” ?

Also, in the qubes builder webm file, at timestamp 5 minute 51 seconds, can I delete the lines that reads the entries

so that I will only have i3 installation ISO when compiled and done?

Also, the original kickstart cfg file doesn’t have @i3 as well as the @gnome and @kde-desktop-qubes lines. So, in your config file, where do you define where the script pulls the @i3 files? Can I trust that?

One thing that bothers me is that during installation the screen reads “PRE-RELEASE/TESTING.” What are the “security drawbacks” for compiling ones own qube ISO? Was that warning message there because you weren’t building with the “stable kernel” ?

because it use testing repo if you want stable then remove these line from builder.conf

Then you have stable up to date qubes iso.

Also, in the qubes builder webm file, at timestamp 5 minute 51 seconds, can I delete the lines that reads the entries

if you plan to use i3 only, you can delete those, but as you can see in the video, I made a 4 DE in the installer, if you try to install other DE it would fail, it’s best you knowledge other if you want to share the iso.

Also, the original kickstart cfg file doesn’t have @i3 as well as the @gnome and @kde-desktop-qubes lines.

If you say why, because other DE is not mature, and perhaps could lead another problem qubes-devel.

So, in your config file, where do you define where the script pulls the @i3 files?

So when we define @i3 from qubes-kickstart.cfg, it would download these file.
and it’s same for other DE too.

Can I trust that?

It’s downloaded from fedora-32 source, qubes dom0 currently rely on fedora 32, perhaps you already know how to answer your question.

Alright, thanks for the answers. I will try to build an i3-only ISO and see how it goes.

you may want to add feh to set wallpaper, dmenu, or other package you need.
so your i3 group is like :

@51lieal hey I did compile using your guide and got myself a pure i3wm QubesOS setup, without any of the XFCE tools/widgets/apps. That was cool to see.

Here are a few hickups that I have though:

Then you have stable up to date qubes iso.

I did remove those lines, however, during the QubesOS installation window, I still see PRE-RELEASE/TESTING in red colors: 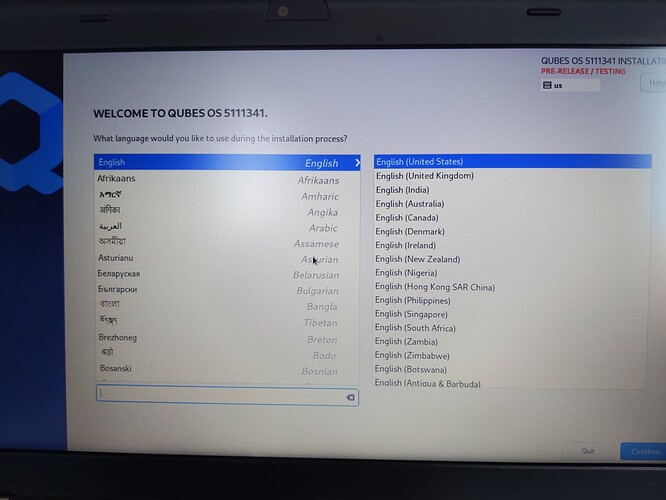 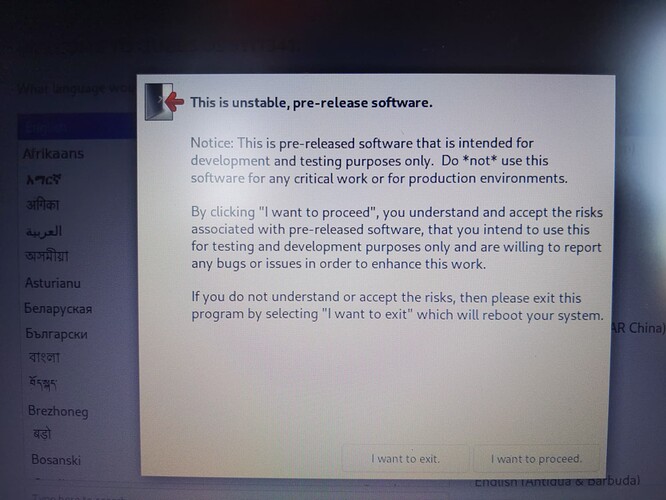 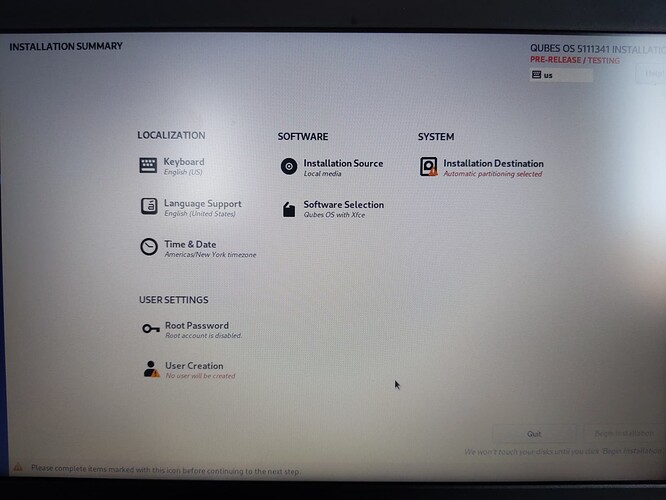 However, after the initial installation is done, and the installer reboots into setting up the debian, fedora, and whonix templates, I am seeing correct QubesOS version numbering and I cease to see the “PRE-RELEASE/TESTING” notification of the earlier: 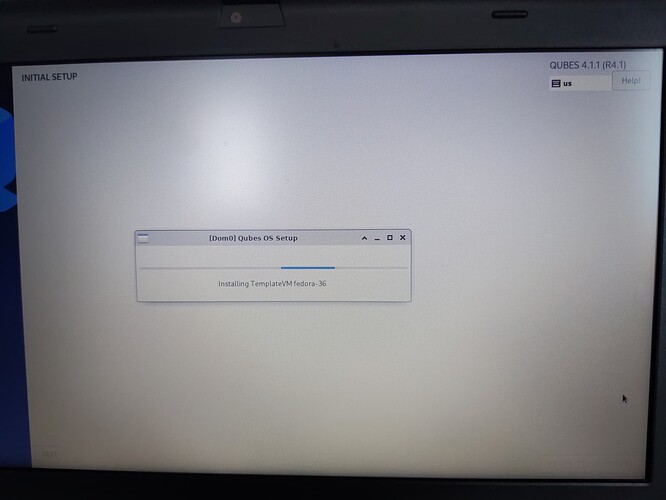 Another curiousity is that creating the ISO following your footsteps results in an ISO file that offers XFCE, GNOME and KDE desktop environments, in addition to the i3 window manager setup: 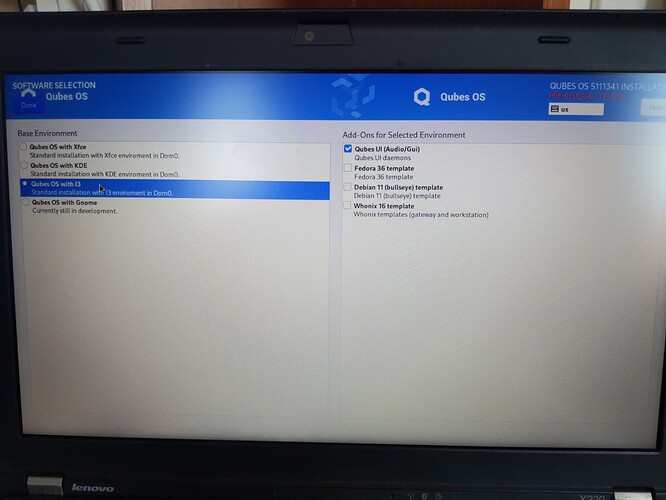 How can I get an ISO with ONLY “Qubes OS with i3” software selection option?
I had deleted the lines that read

from my builder.conf file, as I have suggested doing so in my previous message. However this didn’t erase the Software Selection options of “Qubes OS with Xfce/KDE/Gnome” as can be seen in the above picture.
Do I have to also remove the relevant Xfce/KDE/Gnome group entries and then compile the ISO?

I forget to mention aside from removing those 2 line you need to change this,

you could remove those line, and the build version number will be the date when the iso was build.

to remove other DE in the software sellection, remove these line in comps-dom0.xml

I forget to mention aside from removing those 2 line you need to change this,

OK. But now it got my attention that in my builder StandaloneVM (fedora-36) the home folder doesn’t have the qubes-src folder. That folder is under the qubes-builder folder. So, there is the .ks file under the following location:
/home/user/qubes-builder/qubes-src/installer-qubes-os/conf/iso-full-online.ks

Is this normal? Or was I to run the make get-sources on the home directory or something?

More specifically, do I run these commands under the ~/qubes-builder folder?

More specifically, do I run these commands under the ~/qubes-builder folder?

Oh… I have been building the ISO three times now, with the “incorrect” path for the INSTALLER_KICKSTART variable in the builder.conf file then.

I didn’t get any error messages, nor the process aborted due to this. Any reason why?

In the meanwhile, I will correct the INSTALLER_KICKSTART variable to its correct path and re-compile the ISO.