When will the next version be released?

The latest version now is 4.1.1. When will the next version be released?

Don’t know about the official release, but the signed weekly build should be released very soon.

When these issues are solved, more or less: 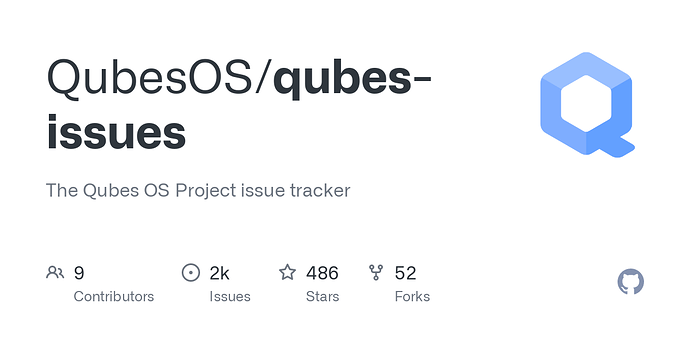 The Qubes OS Project issue tracker. Contribute to QubesOS/qubes-issues development by creating an account on GitHub.

I don’t know whether there will be a 4.1.2 release (or whether we’ll just proceed directly to 4.2.0), but if there is, you can track its progress here:

[How to file a helpful issue](https://www.qubes-os.org/doc/issue-tracking/) #…## Brief summary I've seen more and more people asking for a new ISO lately. If 4.2.0 is still a way off, it might make sense to consider a 4.1.2 release.

I am watching the github issues for a while and was searching for an overview of the features of 4.2 over 4.1. Obvious is the new gui-vm or gui-gpu-vm. But appart from that? Can somebody explain me where qubes is making progress?

I’m looking for the new Xen/dom0:

You can see the 4.2 milestone, there are a lot of UI improvements and the switch to Wayland.

Given the number of newer (and older) computers using AX210/AX211 or similar WiFi cards a sooner 4.1.2 release would be more beneficial than a latter 4.2 release to a Qubes newcomer (or those doing a reinstall).